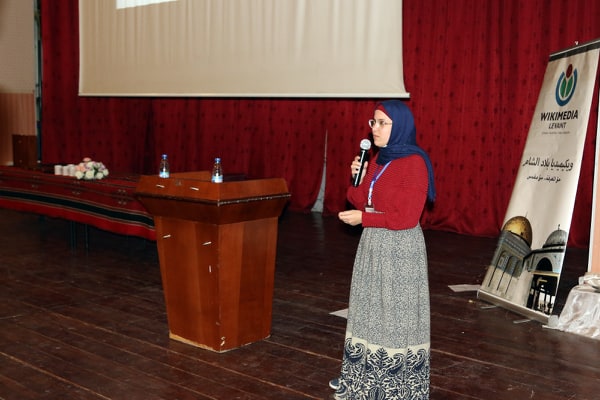 I am Bara’a, an architect, from Hebron in Palestine. I am an editor of the Arabic Wikipedia since 2017. I participated in many editing competitions, conferences and workshops, but I am also the leader of the Wikipedia Education Programs in Palestine and activities and events leader in the cross-country Wikimedia affiliate “Wikimedia Levant”. These activities allow me to get to know new editors by our workshops, events and education programs that I personally supervised  in schools and universities. All these efforts are supporting people to contribute, edit, add and share free knowledge. Our students are quite diverse, male and female, of different ages and specialties, and this is reducing the knowledge gender gap between them.

Here in Palestine, we have many difficulties attracting new editors – I think it’s more difficult than in other countries. In certain areas of Palestine, we are not allowed to hold events and workshops because of political conditions and military occupation, such as borders and barriers. Also, because of the movement restrictions we organize online workshops, but the attraction is much lower, than for an offline workshop. In addition to the lack of awareness about the need and possibility to contribute to and support free content, sometimes we suffer from the problem of obtaining a visa to attend conferences or workshops that may be in other foreign countries – especially for us volunteers. I personally have been confronted with this issue and was returned to my home for no reason.

The general problem lies in the small number of female editors that engage in my country, those that create programs, workshops and help to change the idea “that only men can contribute to this work”. We need to support the principle of equality and put forward that freedom of knowledge is a right for every human being, independently of the gender. Many women here lack the motivation to contribute to Wikipedia. On top of that, not all students have devices to enable them to access the internet and obtain free information. While in my city, Hebron, the internet connectivity is rather good, parts of Palestine, like Gaza, have only internet for a few hours per day. How do you want to motivate anyone to contribute to Wikipedia under these conditions?

In the future, we need to focus more on the involvement of feminists in events or editing workshops. By supporting them, technically, but also morally, we provide a safe environment in which they experience freedom of speech and opinion.