How can Structured Data on Commons, Wikidata, and Wikisource walk hand in hand? A pilot project with Punjabi Qisse 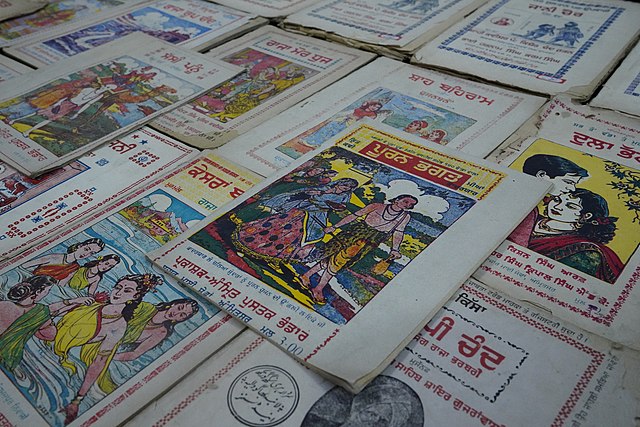 Selection of books to be digitized, described and transcribed as a part of the SDC pilot project. (Image – Satdeep Gill, CC BY-SA 4.0)

I work as a part of the Community Programs (GLAM) team at the Wikimedia Foundation. As part of my work, I support Wikisource, a digital library of public domain and freely licensed texts, which is an important platform for GLAM projects and knowledge exchange in many Wikimedia communities. I have been writing case studies about Wikisource, documenting pain points around it, and prioritizing them with the communities.

In order to learn even more about Wikisource and how it can be improved, my colleague Sandra and I co-mentored a small-scale GLAM pilot project around Structured Data on Commons. We worked with a few members of the Punjabi community around digitized texts on Wikisource. We wanted to ‘learn by doing’: can Structured Data on Commons help to improve and simplify the way in which we add materials to Wikimedia Commons and Wikisource? Can it help us make better and stronger connections between bibliographic data on Wikidata, digitized works on Commons, and transcriptions on Wikisource? What is possible with the current infrastructure, and what needs to be developed to better support this?

I had a conversation with Stalinjeet Brar and Satpal Dandiwal from Punjabi Wikimedians, and here is what we talked about:

Back in January 2019, the Punjabi community came across an interesting set of books belonging to the Qissa genre, a literary genre with Perso-Islamic roots that consists of storytelling in verse, from the private collection of Punjabi author Satnam Chana.

What makes these works interesting is the fact that very little information is available about them. For instance, the year of publication is not mentioned on almost all of them and most of the authors are anonymous.

“ Very little metadata was available to us about these works and their authors. We had to do a lot of research such as consulting with scholars of history of Punjabi literature and going through some of the histories of literature as well.”

A few works from the Qissa genre found at other online digital libraries, such as the Panjab Digital Library, were also included in the project.

Talking about the workflow, the very first step was to scan and post-process all the works followed by gathering metadata about these 20 odd works. Initially, this metadata (titles, authors…) was collected in MS Excel, and then the spreadsheet was imported into OpenRefine, a tool with which you can upload larger sets of data to Wikidata. However, Gurmukhi script was not rendered properly in OpenRefine from MS Excel. So, the community members tried copy-pasting the metadata to Google Sheets and then imported it into OpenRefine and that worked. Using the OpenRefine ‘reconciliation‘ functionality, it was easy to match the authors’ names with their Q numbers on Wikidata, and then new items on Wikidata were created about all these works and some missing authors using OpenRefine.

1024×546
Screenshot of the list of works created using ListeriaBot on Meta-Wiki.

The community was able to identify the copyright status of only 6 out of the 20 works that we digitized: it was only possible in those few cases where we were able to identify an author with a known death date of more than 100 years ago, or a publication date.

The copyright status of the works is included on their Wikidata items, and follows the guidelines that are being written by the Wikimedia community there – see Help:Copyrights on Wikidata for an extensive outline.

Once Wikidata items were created using OpenRefine, the community members felt it was easy to upload the works to Wikimedia Commons using the UploadWizard. Connecting Wikidata items with respective works in the Structured Data tab was also easy, although the community members weren’t sure what properties should be used on Wikimedia Commons (depicts (P180), digital representation of (P6243), or something else). We invite everyone to help us improve the structured data descriptions of the Wikidata items and of the uploaded books.

“The entire workflow included extra steps than what I have been used to, such as creating items on Wikidata and connecting items with uploaded files on Commons using Structured Data.”

Community members feel that creating Wikidata items using OpenRefine is a complicated process and it needs to be simplified, especially if we are hoping that newbies and GLAM institutions might also be contributing using a similar workflow.

“Currently, OpenRefine is for advanced users and I think it needs to be more user-friendly.”

Several of the books are now available on Wikisource, ready for transcription. If you speak Punjabi, feel free to lend a hand! Please note that the structured data from Wikidata and Wikimedia Commons is not included in the book pages there yet, as Punjabi Wikisource does not yet have Wikidata-driven templates. 928×560
The publication ‘Dulla Bhatti‘, ready for transcription on Punjabi Wikisource.

Next steps – what are still general open issues?

How can you help?

This blog post by Satdeep Gill is part of a short series of blog posts on Wikimedia Space about GLAM pilot projects with Structured Data on Wikimedia Commons. Earlier posts are: