Wikisource as a tool for Community Growth

Partnerships between Wikimedia affiliates and cultural heritage institutions like a national library can result in positively boosting youth engagement. This case study demonstrates how Wikimedia Armenia worked with the National Library of Armenia to digitize important cultural texts, and engaged youth in adding them to the free knowledge commons.

Wikimedia Armenia has been collaborating with the National Library of Armenia since 2014 and a large collection of public domain books have been imported from their website to Wikimedia Commons. Undigitized texts from the library were taken on loan and digitized by Wikimedia Armenia. Since 2016, the Armenian community started utilizing the added texts to teach Armenian typing and basic Wiki Markup to school students in an informal environment. Since 2018, the students have been contributing to Wikisource while reading literary texts that were part of their curriculum. At the same time, they ensured these works are freely available online for anyone to read.

For example, this page is the 5th volume of the complete works by Hovhannes Toumanian that was mostly proofread and created on Wikisource by the students of Hatsik Wikiclub. Hovhannes Toumanian is considered as the national author of Armenia, his works played a great role in Armenian literature and culture. Many of the proofread works are part of the school curriculum. This was done as part of a collaboration with the Hovhannes Toumanian Museum.

Wikimedia Armenia aimed to promote the development of quality and diverse content in Armenian on the web, thus enhancing the access to free knowledge to Armenian readers both in Armenia and the diaspora.

This case study used an interview as the main source of information. Satdeep Gill interviewed David Saroyan of Wikimedia Armenia (WMAM) on 22nd April 2019 date. He asked the following questions:

School students in 15 WikiClubs across Armenia read works by classical authors which are a part of their school curriculum and proofread them on Armenian Wikisource. WikiClubs are daily community centers in different regions in Armenia where students and other interested people are welcomed.

Free spaces have been provided by the municipality, school or other public institutions in various cities. Internet and laptops were donated either directly to a WikiClub or via Wikimedia Armenia.

During a period of six months, 267 classical texts were taken on loan from the library and digitized using the DIY scanner at Wikimedia Armenia’s office. These texts were then uploaded to Wikimedia Commons and a copy of all the texts were provided to the library, which were uploaded on the library’s website. 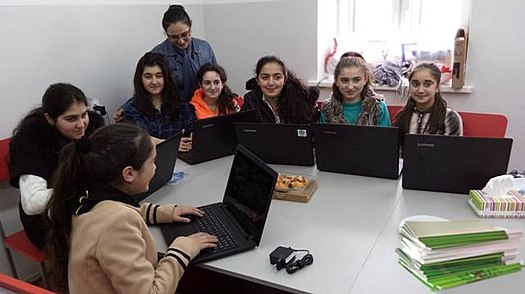 WikiClub coordinators helped in onboarding newbies and taught them to contribute to different Wikimedia projects. Newbies started by editing Wikisource and learned to type in Armenian script. They also learned basic Wiki markup, proofreading and transclusion. After gaining skills and expertise in Wikisource, they moved forward to Wiktionary. Then, after gaining essential typing and language skills, the students learned to edit Wikipedia articles. Wikipedia editing requires additional skills such as how to do research, consult different sources, maintain a neutral point of view and avoid conflict of interest.

First, Wikimedia Armenia listed priority works and assigned them to different WikiCubs on the project page on Wikisource. Every WikiClub had its own preferences, such as the author or the genre that the members of the WikiClub are interested in reading. Wikimedia Armenia worked with each WikiClub individually to keep them engaged and focused.

WikiClub coordinators connected the student’s Wikisource work to other school subjects. For example, when proofreading historical documents, the coordinator of Vanashen WikiClub invited a history teacher to talk and discuss a particular historical event based on the texts.

To encourage more participation and a healthy competition among WikiClub members, certificates, badges, barnstars etc. were given to top editors every month in certain WikiClubs. Top editors from all WikiClubs also got an opportunity to attend WikiCamp.

Wikimedia Armenia collaborated with Hovhannes Toumanian Museum. Students at different WikiClubs proofread and edited the works of Hovhannes Toumanian, acquired from from the museum and then on the basis of the material provided by the museum, they edited articles about Toumanian’s poems, stories, and other works, and connected them to the corresponding pages on Wikisource at the same time.[1]

Wikisource can be used as an onboarding platform for newbies/students to the Wikimedia projects–especially in non-latin languages. This initiative has provided evidence that teaching newbies/students how to type in their language on the web in Unicode fonts is the foundation for further contribution.

Since 2018, Wikimedia Armenia in collaboration with WikiClub leaders have started proofreading works by one author at a time, as opposed to multiple authors at the same time. Different works by the author are divided among different WikiClubs to create a collective and focused effort. This makes it easier to coordinate and evaluate the participants’ contributions.

We have noticed that when the WikiClub participants complete something together, it increases their motivation and encourages them to edit more. – David Saroyan

Cultural heritage partnerships, like the one with the Armenian national library, can support community growth and increase the representation of underrepresented knowledge. In this case, WMAM worked with students in informal educational settings, WikiClubs, to expose them to Wikimedia projects by supporting the transcription of the texts on Wikisource. The result is improved representation of Armenian cultural heritage online. The key takeaway is that such partnerships can make important texts available on Wikisource, which acts as a gateway project for people unfamiliar with the Wikimedia movement.

* Wikimetrics was being used to track metrics, which provided individual edits for every WikiClub member. This helped in tracking the individual performance of the editors, as well as the overall performance of each WikiClub. Wikimetrics has been changed to Event metrics since February 2019 and doesn’t support Wikisource as of now.

Wikimetrics was being used to track metrics, which provided individual edits for every WikiClub member. This helped in tracking the individual performance of the editors, as well as the overall performance of each WikiClub. Wikimetrics has been changed to Event metrics since February 2019 and doesn’t support Wikisource as of now.

Hey @Wargo: Thanks for the question. So, Wikisource has additional namespaces such as Page namespace where most of the work happens such as transcribing/OCRing and proofreading the texts. Statistics around these namespaces are not being tracked on Outreach Dashboard as of now.

Apologies for the late reply!